On the 17th of June, Innovation Leaders Club was kicked off by Tehnopol and SEB Innovation Centre. Club’s purpose is to bring together startups and corporations, have them exchange ideas, and create new products and services. But who would be the leaders of this innovation era? The matter was discussed by the President of the Republic of Estonia Kersti Kaljulaid, Founder and CTO of Testlio Kristel Kruustükk, and Founder and CEO of Krimelte Jaan Puusaag.

Mrs. President Kersti Kaljulaid said, that it would be unfair to say that innovation is only made in the business sector. “If Estonia appears in the rankings of technological development then the highest places are achieved by the government and sadly, our general economy cannot be described as Industry 4.0. In addition to our digital success, Geenivaramu comes to mind but none of them could exist without entrepreneurs that have pushed the country. The peculiarity of our innovation environment is that entrepreneurs can often innovate together with the government who will provide the right legislation. This way, it’s, easier to go on with the innovation, knowing that your clients, your capital, and business are legally protected,” she said.

Founder and CTO of Testlio Kristel Kruustük recalled how she didn’t actually think of innovation when she started the company eight years ago. She just tried to solve a problem in the industry of software testing. “I just wanted to offer a solution for the testers where they could be valued and paid for their time, not for the found errors in the software as they used to. I thought it was wrong. As it came out, I made innovation,” said Kruustük, who is now active in the global market and her platform gathers software developers all over the world.

Jaan Puusaag, Founder and CEO of Europe’s leading construction chemistry producer Krimelte found, that innovation in the entrepreneurship world is very profit-cost based. “The problem with Estonia is that we have very few big corporations. The biggest corporation that has enough clients, resources and can make mistakes is the government. That’s why the government is leading the innovation. Then there’s a lot of empty lands and then the companies that are either eager users or eager implementers. Can an Estonian entrepreneur be an innovator? It’s not impossible, but the chances are slim,” said Puusaag.

The President agreed with Puusaag and added that one of the reasons, why the innovation made by the companies is so slight, is that the government doesn’t pay for the people with Ph.D. degrees.

Testlio, led by Kristel Kruustük, is mainly active in the USA market but she admits that the image of Estonia has been helpful. “We are known as a technologically developed country. I always emphasize that having a small population is an advantage in front of other markets, that allows us to be agile.

Mrs. President agreed with Jaan Puusaag that Estonia is a keen follower in the technology industry.“Due to being followers, we can put a maximum of 7% of our GDP into Information and Communications Technology, Israel, for example, puts 18% because they are the creators of technology.” She dreamt that Estonia could belong to the league of technology creators, but the government should not be the leader in the process. “Government’s purpose is to create the right environment. If we recall two things that started in parallel from the beginning of the century – Eesti Geenivaramu as the Big Data in genetics and our digital ASI. Firstly, people from the Tartu Molecular and Cell Biology Institute with Andres Metspalu as their leader and secondly, Estonian Info and Telecommunications Union together with the banks. They came and ordered a chance to do something,” Mrs. President said.

President Kaljulaid also brought out that even the government itself has another important request in the air with Big Data. “We need a new e-government agreement 2.0. Digital solutions, mining of data, learning AI as well as Geenivaramu are waiting for it because as of today, those things are stuck. We need it, the request is at our front door but today, we don’t see it happening. The government is starting to get in the way of it,” said the President.

Priorities in the development can lead to wrong choices

The President also found that there should not be industries, which developments the government prioritizes. “I’m saying that because of what was going on in the 1990s in the world of hedge capital in Scandinavia and elsewhere. For example, Finland had all its public money in the market go through TEKES (Agency of Technology and innovation, owned by the government) and Sitra (Finland’s Innovation Fund) but through those two, they actually impoverished their entrepreneurship. When the 2008 crisis hit, entrepreneurship in Finland wasn’t diverse enough because there were favored sectors where investments had been directed. Such an economy is vulnerable to shocks. It’s also unfair – why some technologies are supported by the government and some aren’t,” said Mrs. President.

Kaljulaid warned that in the sector of energy, there’s a danger to make the same mistake. Some technologies are in favor and have a lot of public money put into them but that can be the wrong choice for all of us. She would see that we are contributing to a legal space that creates a market where all technologies can equally compete with a condition that they are not producing CO2.

Martin Goroško, Head of Business Development in Tehnopol, agreed that everybody wants to create a country with a broad-based and strong economy, but in Estonia, both capital and human resources are limited. “We have had a big wave of digitalization, arising of technology companies, the startup community has grown quickly, but in the environment of limited resources, where should we point the sharp end? Wide support for some phase of entrepreneurship, education system or foreign investments and bringing foreign workers,” he asked.

“Trying to bring in foreign investments is so 20th century. Slovakia, for example, is in trouble with those amazing BMW factories that Estonia didn’t get in the last century. There’s no point in attracting factories if you are a small country and your main limitation is lack of workforce,” said the President. In the President’s opinion, Estonian enterprises should be supported to expand into other markets, where are more people and where operating at a bigger scale is possible.

Jaan Puusaag brought out that as of 2018, there are 75 companies in Estonia, whose revenue is over 100 million euros a year, and 199 companies, whose revenue is over 50 million. In his eyes, only those 75 have the resources to innovate because innovation requires resources to fail as well. Developing at all times means having teams who are working and some of that work always fails and that’s okay. Failing is written into developments.

For example, out of 200 hundred people working in Krimelte, 20 are working in the development department and only 4 are focused on science every day. The rest fill up the supporting functions – making tests, looking at legal aspects because the company is in a very regulated industry. “If someone comes in with a completely new idea today, we just don’t have the resources to test it. Even right now, we are squeezing out 120%. Maybe this is the place where some methods of giving additional resources could be created,” he ended on a hopeful note. 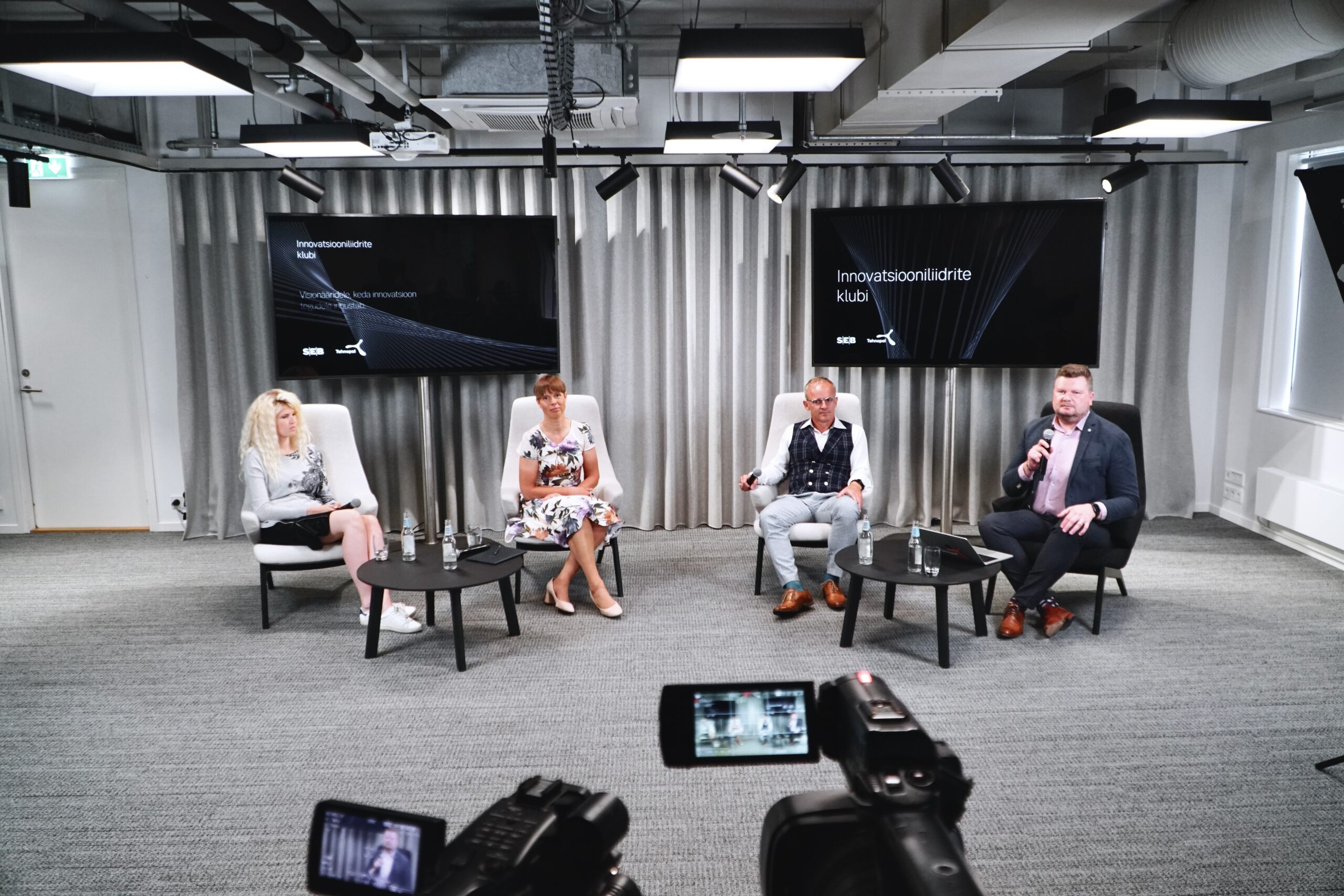